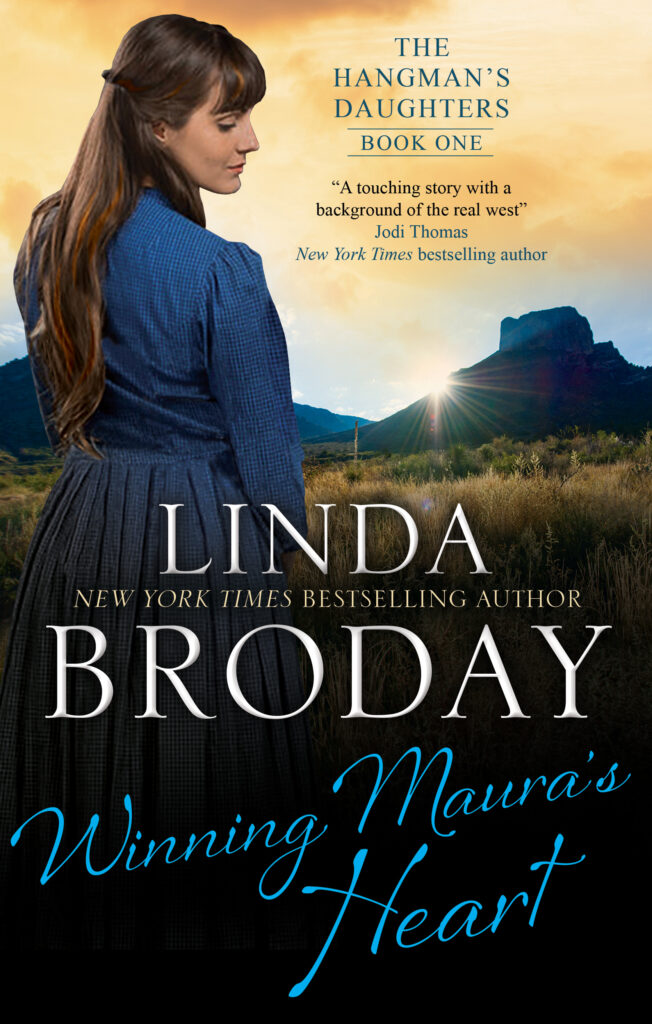 A handsome stranger on her doorstep!

Texas, 1876. Maura Taggart is an outcast. She is the daughter of a hangman and tainted by association – no reputable man would ever want her as his wife. And now she is homeless, along with her sister and the group of children in their care. But Maura has grit. She finds a nearby mission where the nuns agree to take them in and set up an orphanage. But trouble is just around the corner . . .

The Calhoun brothers are identical twins but on opposite sides of the law. Cutter is a deputy Marshal, Jonas an outlaw. When Cutter attempts to break his brother out of a notorious gang, they are shot, and Maura finds one of them wounded, close to the mission – but which brother is he?

As the mysterious stranger regains his strength under Maura’s care an attraction between them grows, but there’s a question over his identity. Just who is this man who only gives his name as Calhoun? Why has his presence brought danger to their door? With the orphanage under threat can Maura trust this handsome stranger both with their safety and with her heart?

Maura dried the straight razor and uncurled the strop. Calhoun watched in fascination as she expertly sharpened the blade. “You’ve used one of those before.”

“I used to love doing this for my father on the rare occasions when he was home. And when he let me, which was in truth only a handful of times. But it made me feel that he cared for me. At least a little.”

“I take it your father was away a lot.”

“Yes, he has to travel where the jobs take him.”

“What kind of work does he do?”

Maura froze. After several moments, she spoke. “I’d rather not say if you don’t mind. His profession has made life—difficult—for Emma and me.”

What did he do? Curiosity had him biting his tongue to keep from asking. If he could bear waiting until tomorrow, he’d ask Max. But whatever it was had kept both girls from having a life.

Apparently, they’d been unwelcome in town so they brought the children out here. Now it made some sense why the gang of men had chopped off Emma’s hair.

They were outcasts. For whatever reason, no one wanted their company.

His blood ran cold. There only three professions that folks had difficulty with, and he didn’t like the thought of any of them. Grave digger, undertaker, and hangman. And the first two were far more acceptable than the third.

Calhoun put the thought aside for now. Maura had gotten the blade at the sharpness she wanted it and stood ready.

“I’ve never done this part of shaving, but I’ll try not to cut you.”

“Thank for that.” He was already sweating. First, at the thought of an untrained person holding such a sharp instrument. But worse than that…she stood so close and would have to lean in to get in the right positions. No barber he’d ever gone to had been encumbered with breasts and Maura’s were quite…well, let’s just say no one would ever mistake her for a man. Not at all. Even if they were blind as bats and deaf as fenceposts.

“Relax, Calhoun. You’re not scared, are you?”

“You act like you’re about to be drawn and quartered like they did in jolly old England.”

Her sleeve brushed his cheek as she made the first stroke. She leaned to whisper. “You’re in good hands, Calhoun.”

A side glance found him staring down her dress at all that soft skin. He tried several times to speak before he managed to croak, “Yes, ma’am.”

She moved and the view disappeared. He could finally release the breath he’d been holding. Despite her inexperience, her strokes were slow and smooth with no hesitation or nicks.

But keeping her bosom away from his face was all but impossible. He kept his eyes closed for the most part but every time he opened them, there they were.

Normally, he wouldn’t complain but he was trying to be a gentleman as much as he was able. When his body reacted and he was about to embarrass himself, he pictured his last fishing trip and counted the fish on his stringer. When he ran out of fish, he counted the worms, then his bullets.

“Are you going to sleep, Calhoun?” she asked.

Good Lord, he was far from that! Every nerve ending was standing on end and saluting. He folded his hands over himself.

“Every chance I get, but it’s been a while since I last went.”

“Lean your head back and tighten the skin around her mouth and nose. A little more and we’ll be through.”

He did as she asked and found his head resting on those soft twin mounds. It was like floating on a cloud.

Stop it. Just stop it. He couldn’t let himself enjoy the sensation. It was wrong, wrong, wrong and he was about to lose control. And would if this went on for long. And then what?

“I’m trying.” But all sorts of inappropriate images were running through his head.

The moments passed as she finished up then dropped the straight razor into the bowl of water and stepped back. “I’m done.”

Not a moment too soon. He struggled to his feet, wiping away the excess shaving soap with the towel. “Thank you. It feels good to rid myself of those bristles.”

He chuckled. “You mean human. I’m beginning to feel like it, thanks to you.”

Without looking at him, she opened the door to empty the bowl of water. “No offense, but I hope you can manage by yourself next time.”

Something had happened to her voice. It seemed a little strained. Had this affected her as it had him? When she turned, he had his answer. Her dress couldn’t hide the swollen nipples, proof of her aroused state. She was in a tizzy, gathering up everything and shoving them into the bag she’d brought.

She was angry. The twin spots of high color on her cheeks told him that much. Maybe more at herself for letting him talk her into a situation where she didn’t know the rules. Then again, she probably blamed him. In truth, he’d enjoyed the closeness.

He guessed this wasn’t a good time to ask for help with his boots.

“Maura, it’s okay to feel like a woman,” he said softly. “There’s nothing wrong when a body responds. It doesn’t mean I’m going to take advantage of you.” When she wouldn’t look at him, he hobbled to her and lifted her chin with a finger, staring into her blue eyes. “You’ve seen every square inch of my body and know I’m no prize. I’ve been through hell and back and only time will tell if I brought some with me. In a few days, I’ll be ready to ride and get out of your life.” He cleared his throat and tucked a strand of hair behind her ear. “But being here with you has been the best days I’ve spent in a very long time.”

He pressed his lips to her cheek and knew he’d never forget her as long as he lived.