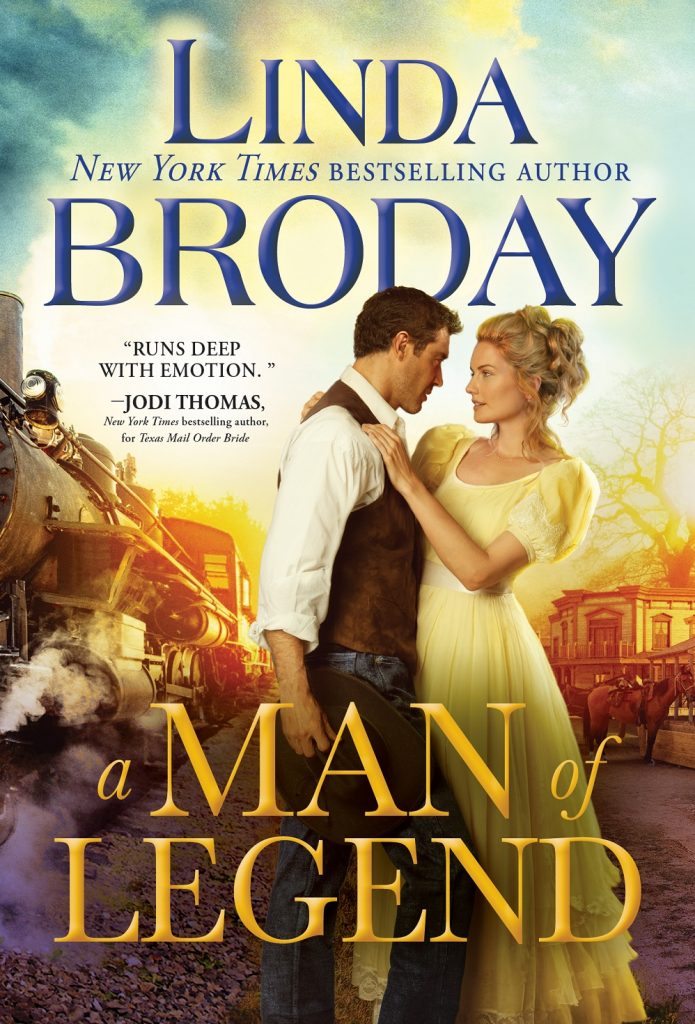 A MAN OF LEGEND

Bestselling author Linda Broday sweeps readers back to the wild and untamed West, where men became the stuff of legend, with:

A secret waiting to be unearthed

And a passion no one could ever deny

Crockett Legend has always loved Paisley Mahone, but a family feud sure can ruin a romance. When her father turned against the powerful Legend clan, she took her family’s side and broke Crockett’s heart into pieces. Now her father’s dead and Paisley and her last remaining brother are convinced the Legends are to blame.

If only he can find a way to prove his innocence…

A chance meeting throws the two warring hearts together, and when their train is held up by outlaws, Crockett and Paisley have to team up to save a young boy from dying. A tenuous truce is born. Together they may have a chance of bringing the truth to light…if they can get to the bottom of who’s been trying to turn the two powerful families against each other. With so many secrets to unbury, it isn’t long before Paisley finds herself in the crosshairs, but Crockett vows there’ll be hell to pay if anyone hurts the woman he loves—or stands in the way of a Legend in the making.

Just because trouble has come visiting doesn’t mean you have to offer it a place to sit down. That had always been Crockett Legend’s motto and it had served him well. Until now. Looked like it might be too late at this point for any type of homespun cowboy wisdom. The dye had been cast.

Rays of an apricot sky through the idling train’s window sent a reminder that his early morning travel could yield yet more surprises and it was best to be prepared. If possible.

He rubbed his face with his hands and glanced around at the people still filling the car. A group of men in rough work clothes were talking about going to the oil fields, hoping to find work in the Texas boom towns that had recently sprung up overnight. In fact, the black gold and talk of getting rich seemed on everyone’s minds these days.

A swish of delicate fabric brushing his legs interrupted his thoughts as a woman hesitated, probably scanning the car for a choice of empty seats. Finally, she mumbled something under her breath and took the seat across the narrow aisle from him. The faint scent of sage and wildflowers wafted around him. He glanced up with idle curiosity and jolts of the familiar rushed through him.

He sat up straighter. He’d not spoken to her in three years, ever since her father and oldest brother had launched an all-out war with the Legends over a section of land. Joseph Mahone accused Stoker Legend of cheating him out of it. But the truth was Mahone had lost the land outright in a poker game to Stoker. Now the situation had become a powder keg.

Crockett took in Paisley from beneath the brim of his Stetson. Three years hadn’t made a lot of difference. Her hair, still the color of ripe sunflowers, was swept into a low knot on the back of her neck. She stared straight ahead, her light green eyes glistening. A little plum hat perching on the crown of her head matched the color of her simple dress.

A stir raced along Crockett’s body, telling him he’d not spent enough time erasing Paisley from his mind. Dammit! She was still so beautiful—still so unreachable. Still so forbidden.

A long sigh escaped his lips. As the iron wheels began to turn and gather speed, leaving Fort Worth, Texas, and the business he’d tended to behind, his mind took him back to a sweltering summer day when they were kids. The ride to the swimming hole to cool off. One corner of his mouth quirked up. He’d dared Paisley to go in naked with him. Back then, she’d always been quick to take a dare.

Memories piled up. Her breasts tight against his chest. Her wet, silken body sliding over his in the warm water. Sultry kisses of fire. Everything about her was branded in his brain. Then came the damn feud when she’d chosen her father’s side.

In those days, he’d called her Firefly and the pet name had fit. Now, she’d likely slap him good. As angry as she was, he didn’t want to press his luck.

Outside, a horseless carriage raced alongside the train in an apparent attempt to outrun it. Crockett snorted. Another fool short on brains. Texas had long reached its quota of stupidity. A bit of the devil got into Crockett. He leaned across the aisle and touched a forefinger to his hat brim. “Morning, Paisley. Nice to see you.”

She slowly raised her long lashes, her mouth in a tight line. “Crockett,” she hissed.

After the single word, she turned to the window, clearly dismissing him. But he was like a bull charging an interloper, not content to share a pasture or a train ride without more. “How’ve you been?” he asked quietly.

Swinging back around, she spat, “I might have no choice but to be on this train with you but don’t expect me to carry on a conversation.”

He tried to block out her beautiful features so close and yet so far. Tried to maintain some semblance of composure. But the little freckle at the corner of her mouth stole his focus. He’d especially loved how that freckle had seemed to wink at him when he kissed her. She could deny their close friendship, the times they’d spent together, and the secrets they’d shared beneath a moonlit sky, but that damnable freckle made her the same girl she’d always been.

And he wasn’t willing to walk away from her a second time.