CHRISTMAS IN A COWBOY’S ARMS

In my story, The Christmas Stranger, a drifter named Hank Destry finds himself in a blizzard. He doesn’t know where he is and can’t find any shelter from the storm. The threadbare coat he wears is no protection from the elements. Finally, his frozen hands can’t hold the reins anymore and falls from the saddle. A pretty young woman from the mercantile, Sidalee King, rescues him and nurses him back to health. Hank finds more than he ever bargained for on this snowy Christmas. 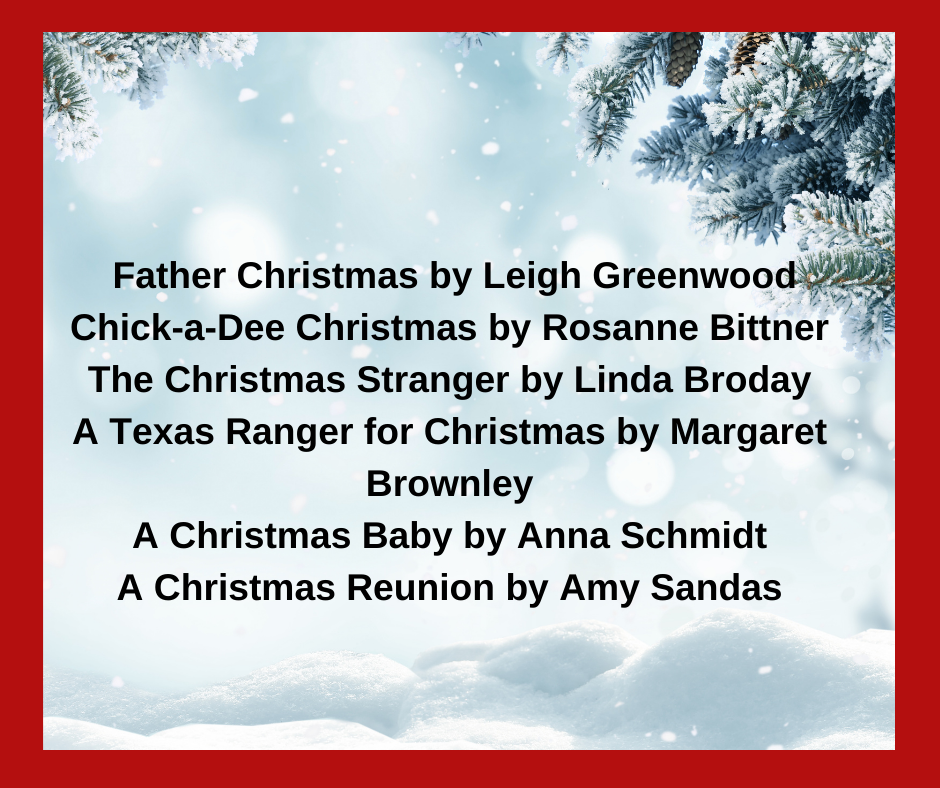 The howling December wind whipped around Hank Destry, doing its best to knock him from the saddle. His numb hands could no longer feel the reins. Seconds later, his blue roan stepped into a snow-covered hole and went down to one knee before rising to struggle on. One more obstacle to overcome would probably do them both in.

Mother Nature was throwing everything she had at him to test his mettle and the white-out made travel extremely dangerous.

Hank shivered in the freezing cold, trying to ignore the stinging sleet hitting his face. He tugged the collar of his threadbare coat up around his ears and studied the barren land, looking for some kind of shelter. The blizzard limited his vision to ten yards and no dry place appeared in sight. Darkness would soon fall and he didn’t know how much farther he could ride. He was worried about the condition of his horse more than for himself. Boots and his dog, Beau, were all he had.

An old man once told him that when all hope seemed lost, cinch up your britches, set your sights on the horizon, and keep moving.

That’s what Hank had been doing his whole life, just putting one foot in front of the other, trying to stay ahead of trouble. He’d all but given up hope for better. There didn’t appear to be any place for him.

The border collie walking alongside glanced up and whimpered as though saying he too needed in out of the freezing elements.

“I’m doing the best I can, Beau. I’ll find shelter soon.” Hank squinted and scanned the inhospitable landscape again. “Just a little farther. I promise.” He prayed he could deliver on that. The animals didn’t deserve to suffer because he couldn’t take care of them.

His eyes stung from the twisting wind and he’d long lost the feeling in his feet and hands. Hank cursed the fact he had to be out in this storm at all. But he had nowhere to turn back to. The roads behind him were barricaded by mistakes and misfortune. There was nothing but pain and hurt back there. Forward was the only direction left—if he survived these freezing temps.

Surely he could find one place that welcomed a down-and-out man like him.

He was no stranger to work and could put in a full day doing any kind of job. But finding someone willing to give him even half a chance—so far it appeared none existed.

A few miles farther, he slid from the saddle and crumpled to the frozen ground. Snow drifted around him.

Directions didn’t matter much anymore. The only way was down.

His eyes drifted shut and he no longer felt the bitter cold.

Hank slowly tugged the long silk ribbon from around her neck, trailing the red fabric down one arm. He leaned closer. “There’s some mistletoe right over your head. I hope I’m not pressing my luck, but do you mind if I kiss you again?”

A happy, warm glow swept over her. “I don’t see anyone trying to fight you,” she whispered.

He pulled her up into his arms and drew the ribbon around her, tethering her to him. Sidalee had never felt more alive, more breathless, more…hot.

She tilted her face to him, feeling the wild beat of his heart that matched hers. He gently anchored her against the hard wall of his chest. The moment his lips touched hers, an aching hunger swept through her, turning her knees to pudding.

The yearning for him was so strong she clutched him to keep from falling in a puddle at his feet. One arm curled around his neck just under his hair. The strands brushed her skin like tiny feathers.

That’s when she knew she was falling in love with Hank Destry.