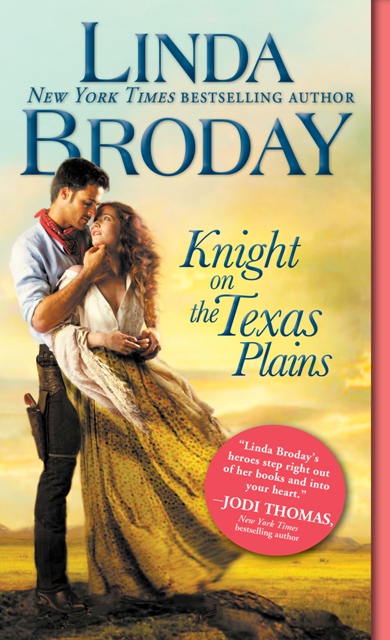 KNIGHT ON THE TEXAS PLAINS

He’ll do whatever it takes

To keep them safe

Duel McClain has lost everything he’s ever loved: his wife, his son, his sense of self. But when a strange twist of fate—and a poker game he’ll never forget—leaves an innocent little girl in his care, Duel vows to defend his new family to his very last breath. If only he knew a single thing about taking care of babies…

Just as Duel swears his life can’t get any more complicated, a beautiful woman stumbles into the light of his campfire, desperate for help. Jessie Foltry is hungry, tired, and running for her life. She agrees to help Duel care for the child in exchange for his protection, even as she fights to guard her broken heart. But Duel will do whatever it takes to make Jessie see that the Texas plains have more than one kind of knight, and perhaps their salvation is closer than either of them could have dreamed…

His boots crunched on the hard ground when he stood. Jessie seemed oblivious to him as he strode to retrieve the child’s bottle from the bedroll. The mysterious woman was once again lost somewhere inside herself. Lost and so alone.

“I’m taking Marley Rose home to Tranquility.” He tugged the nipple off the bottle. It released with a plop, and the smell of curdled milk reached his nose. “Phew. Girl, didn’t know you’d be so darn much trouble.”

Marley giggled excitedly, riding piggyback to the creek to rinse out the container. Jessie had moved to the campfire when he returned. The forlorn look etched shadows across her face as she stared into the flames.

“You’re welcome to join us if you’ve a mind. Lord knows I need help with this young’un.” Something wet ran down his back. He could hazard a pretty good guess what it was. This baby business was no bed of roses.

Luckily, he managed to fill the bottle after missing the opening only a few times. Pulling the rubber nipple over the top proved the biggest challenge. It appeared to have shrunk when he took it off, because he didn’t see any way in hell of getting it to fit.

“Let me.” Jessie had crept up beside him again. The ghostly way she moved gave him the willies.

Their hands touched when she took the two items, making her jerk back in alarm. Sheer terror contorted her features into a mask.

“You all right?” He’d never felt so helpless. What could a man say to ease the torment of a woman who’d suffered what she had? It would take more comforting words than he knew.

She didn’t reply, just ran her tongue cautiously across her bottom lip. Then, before he could blink, she melded nipple and bottle together, once again proving herself to be capable and efficient, important things in raising a child.

Light fingertips brushed his bare skin when she lifted Marley Rose from her perch. He reasoned it was the heat of the sun’s rays that caused the beads of perspiration dotting his forehead. Had to be. He ducked his head, hoping she couldn’t read his thoughts. He must have lost every lick of sense he had. The last thing on earth he needed was a woman. And the way she recoiled from him clearly expressed her view of men.

Relieved of the babe, he dove into his saddlebags for the extra shirt he carried. Pulling it on, he could hardly button it fast enough. Covering his chest made him feel a whole lot better. Not much he could do about his wet trousers though. The wind would have to dry them.

His growling stomach reminded him of the rabbits he’d killed. That blasted goat had taken too much time. Better get a move on or the sun would be overhead before he knew it.

“I could sure use your help, ma’am. That is, if you want to come along.” Now that he was fully clothed, he could glance at her directly. Jessie had found a seat on the large rock he’d propped
against during the night. She cradled Marley in her arms as if she was a precious treasure. The girl’s noisy sucking on the fresh goat milk blended with the animal’s protesting bleats.

The woman’s attention appeared to rest solely on Marley Rose. She caressed the dark curls. “What would you want in return?”

Given what she’d gone through, her suspicion was expected, right down to the stony grit in her tone.

“Only your kindness with the babe, nothing more.”

When she swung her head in his direction, he matched her intent gaze with honesty. “Make you a deal. I swear on the McClain family Bible I’ll never lay a hand on you. I offer you safekeeping. When we get to Tranquility, I’ll see you get any place you want to go.”

Duel didn’t make deals lightly. “The word of a McClain has stood the test of war, famine, flood, and pestilence. I come from a long line of promise-makers. Heck, my grandfather once parted the Colorado River with his cane because he gave his word.”

That brought a hint of a smile to Jessie’s lips. “You’ve got yourself a deal, mister.”

At that, Marley Rose raised her head and grinned as if to say she was relieved to have someone along with good horse sense.

“Drop the ‘mister.’ Name’s Duel.” He threw it out offhand, trying to sound nonchalant as he bent to the task of gutting and skinning the rabbits.

“Don’t think I can do that, Mr. McClain.” Her manner stiffened again, shattering the small headway he’d made.