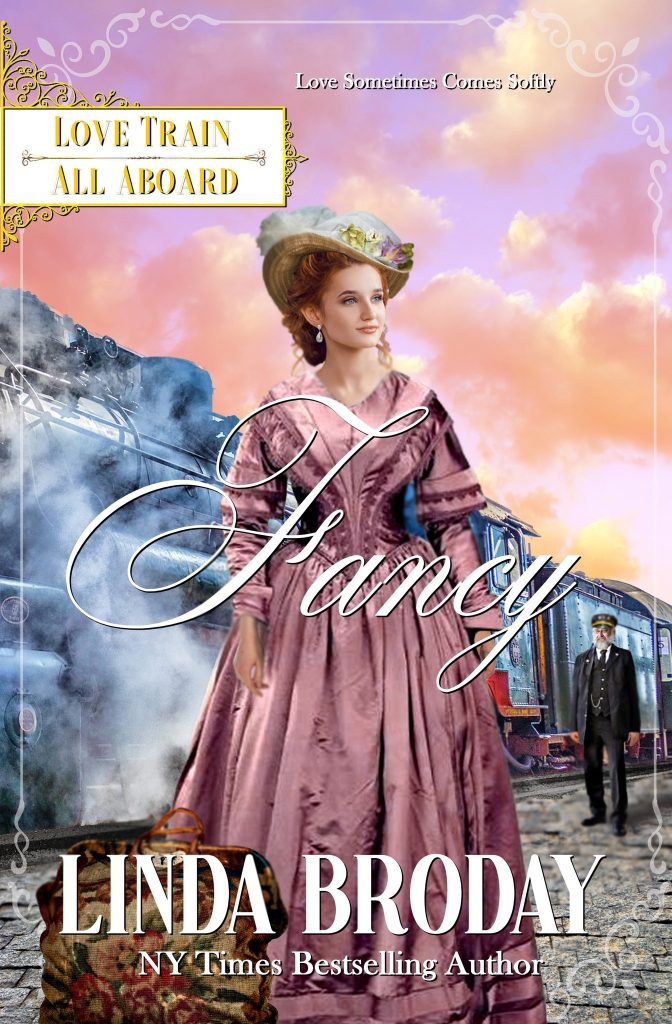 A stolen baby
An orphan child
A bargain struck

Told her baby died in childbirth, Fancy Dalton grieves for her son. But in the midst of a raging storm, a shadowy figure appears and tells her that he’s alive and well! He was stolen! Now she has an address and a name. From despair comes hope.

One thought drives her—finding and getting him back. Selling everything she owns, Fancy buys a one-way train ticket to Denver. Nothing and no one will stop her. In a mad dash to board the train, she collides with Jack Coltrain. As fate would have it, the rugged cowboy, on a mission of his own, sits next to her. Experience has taught her to be wary of men. But when her bag is stolen, he gets it back and earns a small piece of her trust.

As the iron wheels roll, taking her closer to her two-year-old son, Fancy and Jack discover an orphan girl who needs their help and open their arms to her. Ten hours from their goal, Fancy and Jack strike a deal—her help for his. Desperate times for both call for creative solutions…but marriage, even in name only? However, nothing is off the table. She’ll do whatever she must to save the orphan and get her child back. Still, giving Jack her heart…that’s not part of the bargain.

BOOKS IN THE SERIES IN ORDER OF RELEASE

Mama grimaced with the pain wracking her body. “When I was a little girl, I thought I could find a pot of gold at the end of a rainbow.”

“We all want to believe in fairy tales.” Fancy smoothed the soft, worn quilt. It was too bad such things never came true.

A knock sounded and she went to crack the door open enough to peer out. “Yes?”

A shadowy woman stood in the deluge under an umbrella. With glittering eyes and a dark hood over her head, she looked frightening. “I’m looking for Fancy Dalton.” Water poured off the caller’s umbrella. “I was told she lives here.”

Fancy hesitated for a moment, almost shutting the door. Finally, she spoke. “You’ve found her.”

“Good. I have something to tell you.”

What could this be about? It was horrible weather to go calling. Just then frightening thunder crashed around them.

“Won’t you come in out of the storm?”

“I’d rather not. This is urgent and you’ll want to hear what I have to say.”

“Alright.” Fancy shivered in the cold, moist air. “I’m listening.” A flash of lightning illuminated the woman’s face that seemed vaguely familiar. “What is this about?”

“I’ve kept this secret long enough and I can’t live with myself anymore.” She hesitated for a second. “Your baby is alive.”

Alive? Could it be true? A ripple of excitement raced through her.

The woman’s anguished whisper raised the hair on Fancy’s neck. “I did a horrible thing.”

A knot formed in Fancy’s stomach. “What do you mean? Because I never got to see my baby?” The midwife had told her that the sight of his little blue body would be too traumatic, so she’d never gotten a glimpse of the child she’d loved with all her heart and soul. Something she regretted to this day. She should’ve insisted but had been too shaken and weak.

Suddenly, she recalled the shadowy face. And a name. Judith Winters.

“I lied when I said he’d died in birth.” Mrs. Winters pressed a piece of paper into her hand. “Here’s the address where you can find him.” She took a deep breath as though to cleanse herself from the awful deed she’d done.