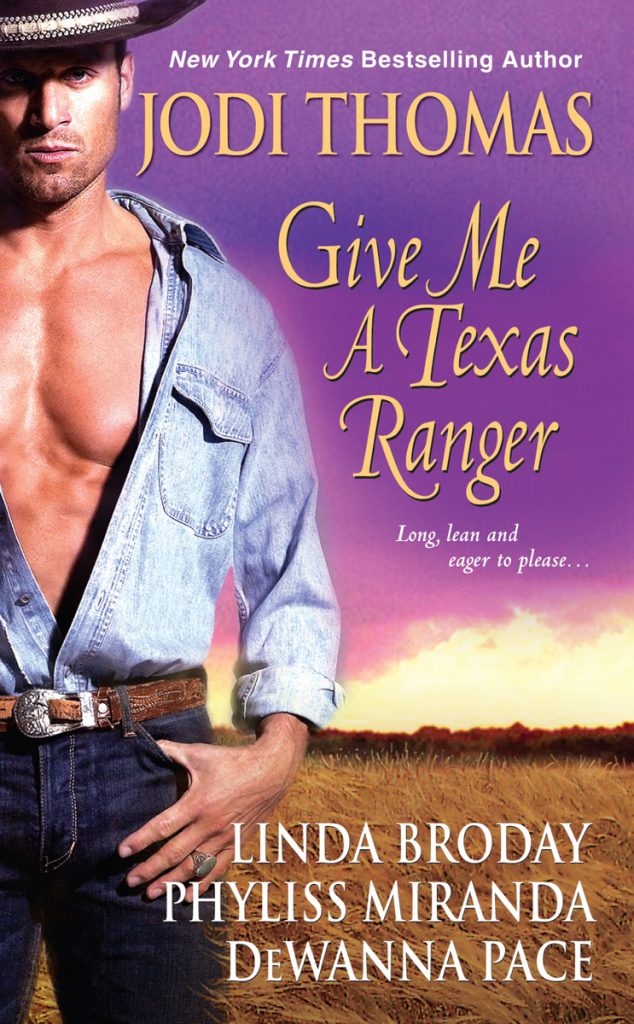 GIVE ME A TEXAS RANGER

The Ranger’s Angel by Jodi Thomas

One Woman, One Ranger by Phyliss Miranda

The Perfect Match by DeWanna Pace

In rescuing Texanna Wilder, Texas Ranger Stoney Burke struggles to remember all the reasons why he needs to keep her at arm’s length. But coming face to face with her again, forbidden memories make it difficult and he finds himself caught between his hardened heart and a duty to protect his best friend’s lovely headstrong widow. Marriage would solve the problem, but is Stoney willing to go that far? After all, Texanna had certain ideas about what her husband could and couldn’t do. Stoney would rather die than quit being a Texas Ranger. It’s in his blood. Locked in a fight to keep her safe, Stoney comes to see that old grudges have no place in the future and that love can survive past secrets if only he gives it a chance.

“All of these stories blend together to create a complete picture of the men who were Texas Rangers–men with morals and commitment who took their jobs seriously and were there to keep ordinary men and women safe. It is obvious that these four writers worked collaboratively to insure that their stories would work together. Each story provides a different perspective on the men of the Texas Rangers and the tasks that they had to do. This book is a definite must-read!” —Eye on Romance

“As I was reading this wonderful tale, one word kept going through my mind—perfection. From the reluctant but stalwart Stoney to the hilariously strong-willed Texanna, Ms. Broday makes you feel like you are right there as the misadventures of this tangling duo unfold. Heart-warming, romantic and irresistible, this story will put a smile on your face and keep it there.” —Love Western Romances

Praise for Undertaking Texas  “As I was reading this wonderful tale, one word kept going through my mind—perfection. From the reluctant but stalwart Stoney to the hilariously strong-willed Texanna, Ms. Broday makes you feel like you are right there as the misadventures of this tangling duo unfold. Heart-warming, romantic and irresistible, this story will put a smile on your face and keep it there.” —Love Western Romances

Texanna Wilder tried to calm her heartbeat as she cautiously laid the sharp edge of the razor against Stoney’s finely chiseled jaw.

There was a connection, something linking her to this steely-eyed Ranger that stood apart from Sam. Stoney suddenly rode back into her life on a day when she was at her lowest. He disturbed her thoughts, the very core of her being. He’d awakened all those old feelings she’d kept buried for so long and made her think of rainy music on a tin roof. Of the breathtaking beauty of a rainbow after a violent storm.

Heaven help her! Yes, Stoney definitely made her think of passion.

She couldn’t let him know how deeply he affected her, for the feelings he carried turned more toward the murdering side than the romantic. She prayed he might forgive her in time. But, it didn’t appear his feelings would alter soon.

Keep the strokes long and smooth she told herself and quit thinking about music and passion. She’d never forgive herself if she marred his handsome profile.

Her breath seemed caught somewhere in her chest.

Stoney Burke had a rugged strength that Sam lacked. Not that Sam was soft. Her husband just hadn’t had the fierce determination it took to survive in the rough Texas town. He’d believed that no one would harm you if a fellow lived his life and minded his own business.

That philosophy cost him, cost them all, dearly.