Sometimes a date sticks in a man’s head like stubborn horse nettle. July 22, 1952 was Levi Taggart’s. Twenty years ago exactly to the day, at barely ten o’clock in the morning, his father had held a Colt semi-automatic pistol to his temple and fired, the act thereby removing him from the multitude of problems he’d faced. Levi had been fourteen.

With thoughts whirling and the past and present mirroring in his mind, an unrelenting south Texas wind whistled through the dead crop and kicked up a dust cloud around him.

He knelt amid the shriveled corn stalks on his farm, grabbed a handful of dirt, and let it sift through his fingers. Bone dry. No rain in five months had laid the ground to waste. The land, the crops, prayers, and his soul were as parched as California’s Death Valley.

In the left pocket of his faded overalls was an overdue notice from the bank. The bulge in his right pocket offered permanent relief from those problems.

Dirt still coating his fingers, his hand moved closer toward a final solution. 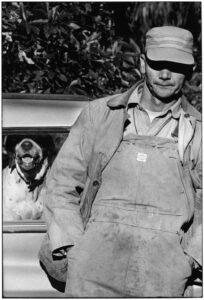 But what about his two children? They were the only thing that might stop him. With Nate and Sarah’s mother lying dead in the grave not even three months, they’d likely go to an orphanage. Lord knew Levi’s mother wouldn’t take them to raise. She’d made that clear. Levi had heard about orphanages and he couldn’t bear the thought of sensitive Nate and little Sarah being mistreated. The people there probably wouldn’t let Sarah cling to her favorite blanket for comfort. Or see Nate at nine, fighting back tears, trying hard to be a man when he hadn’t gotten to be much of a boy yet.

Levi cleared his throat and tried to settle his mind on solutions. Maybe he could sell some things. But what? His old Ford pickup had broken down. The tractor halfway ran but he couldn’t farm without that. A few pieces of jewelry that had belonged to his wife wouldn’t fetch enough to pay the light bill.

A small hand touched his shoulder and he jumped.

Behind him, Nate spoke in an equally quiet tone. “Don’t bother Daddy. I’ll try to find you something, Sis. Come on.”

Shame washed over Levi to have his boy trying to be the grown up. “No, Son, that’s my job.” He stood and swung Sarah up in his arms, brushing the wispy blonde hair out of her face. “Let’s go see what I can scrounge up. Then maybe we’ll go visit with your mama.”

“At the graveyard?” she asked.

Sarah wound her arm around his neck. “Can she hear me when I talk to her?”

Levi was silent for a moment, wondering the same thing. Had she also seen his moment of weakness? Shame washed over him. Marianne had seen the man he’d tried to be.

“Yes, I believe she can.” And she likely heard him too when Levi cried her name at night while the kids slept. She must think him nothing but a big failure. The hard truth wiggled into his brain. Marianne had surely bore witness to his inabilities.

Nate trudged behind. “I’ll tell Mama about the marble I found. And the frog living under our house.”

“Just as soon as I find you something to eat.”

They walked across the field and went through the kitchen door. The stillness of the house struck him as it always did when Levi came in. The dwelling, too, seemed to weep.

Levi set Sarah down. “Go play while I fix breakfast.”

After she ran off, he put the gun away and opened the pantry door. The shelves were empty save for a smidgen of flour, enough coffee for one more pot, and a fourth cup of pancake mix. His chickens had stopped laying, but oddly he’d found three eggs on the back porch that morning. Where they’d come from, he didn’t know. Neighbors he guessed. They sometimes shared what little they had. At sight of the eggs, gratefulness had burst from his heart, and he’d saved them for Nate to cook in the event he carried through with his plan.

Weevils were in the pancake mix and Levi started to throw it out but stopped. After sifting the bugs out, he stirred up the little bit of batter, trying not to think about tomorrow.

Or the next day. Or the one after that.

It didn’t take long to make the meal. He stood looking at the pitiful fare and called the kids. Both wore long, solemn faces as they sat at the table. Trying to ignore his rumbling stomach, he set the plates in front of them, adding glasses of water.

“We’re out of butter and milk. I’m sorry. At least this is filling.”

Nate glanced up at him, his gaze searching. “Where’s yours, Daddy?”

“Uh, I already ate. I’ll be outside working on the truck.” Levi hurried out before Nate could ask another question and force more lies.

He made it to the pickup, opened the door, and sat in the driver’s seat before he let the sobs come. A failure. Even the sorriest kind of man provided for his family. He didn’t know how long he sat there but the sound of the back door slamming jarred him to life. He wouldn’t let Nate and Sarah see him like this. Climbing out, he lifted the hood and began tinkering with wires, hoses, and brushes. None of his efforts would fix his dead battery or the broken head gasket.

Nate jostled his elbow as he tried to fit under the hood. “We finished, Daddy, and I washed the dishes.”

“It was real good,” Sarah added softly. “Can we visit Mama now?”

Levi raised, lowered the hood, and wiped his hands on a rag. “We sure can, honey.”

With Sarah between them, Levi and Nate took a hand and they walked to the little cemetery and stood beneath the big live oak that shaded the small plot.

“Hi, Mama.” Sarah squatted in front of the marker Levi had made. “I hope you can see me. I love you very, very much.”

Tears filled Nate’s eyes. “We’re trying, Mama, but it’s hard. I wish you didn’t have to go. I wish you were here. I wish everything was good again. If you can, will you tell God we need rain real bad.” He walked away, turning his back, staring into the distance.

The boy needed space and Levi gave him that. He knew the struggles of trying to make sense of a grownup’s world.

They didn’t stay long, and the sun was getting hot even though it was only mid-morning. Besides, he had things to get to. He told Nate to go to the next farm and play with his friend, giving him strict orders not to come home until supper.

A measure of disquiet flickered in Nate’s brown gaze. “I’ll stay here with you, Daddy. You might—” his voice broke, his chin quivering with a fear he likely didn’t fully understand. “You might need me.”

“No, Son.” Levi laid a hand on his boy’s thin shoulder. “Go play. I’ll be fine. I promise. Pick your sister up at the Andrew’s house before you come home.”

Apprehension still filled the boy’s eyes. “I will.”

Levi breathed easier when Nate started toward his friend’s farm. Then Levi left Sarah with her little playmate across the road.

Free to walk the six miles into town, he set off. He wouldn’t come home without something for the kids to eat. He was determined to find some type of work, dig ditches if nothing else.

The first three places he inquired at had nothing, but the owner of a mechanic shop promised a ten-dollar bill if he could fix the timing belt on the mayor’s Chevrolet by five o’clock.

Ben Dixon rubbed the back of his neck. “I don’t have a minute to work on it and the mayor wants it now or he’ll take the car somewhere else.” He sighed. “Patience has never been his strong suit and I can’t afford to lose his business as tight as things are.”

“I’ll get it running,” Levi promised, thinking of what ten dollars would buy in food.

By quitting time, he had the Impala purring like a kitten. Dixon handed him ten dollars. “Say, I might have a full-time job if you’re interested.”

Levi told him about the kids and the fact he lived outside of town. “I wouldn’t be able to come in at eight. I have the kids to take somewhere and my pickup’s broke down so I’ll have to walk.”

Dixon asked what the old Ford needed to get in working order and Levi told him. He went to the back and returned with a battery and the new part. “Pay me for these when you can. By the way, I’ll take you home. I go out almost that far to get to my place.”

Thankfulness for a caring stranger washed over Levi like a dam burst and he swallowed the lump in his throat. Pride be damned. “I think I can get my old pickup running by morning, sir. Thank you for letting me work off the cost.” Levi shook his hand. “I’ll just need to stop for a few groceries before we head out if you don’t mind.”

Dixon laid a hand on Levi’s back. “Of course not. I’m glad you came in today. I’ve gone through three mechanics in as many weeks, so I’d given up on finding someone for the job. I think the good Lord must’ve sent you.”

“Maybe so. I was down to my last bit of strength and didn’t know how I’d go on another day.” Levi didn’t mention what he’d almost done. Thank God he hadn’t pulled that trigger.

A short while later with a sack of groceries, the car battery, and gasket in the back seat, Ben Dixon drove Levi home. During the drive, he told his new boss about his wife’s death and how hard it had been with no rain and dead crops. He found it easier to talk to Ben than it had to his own mother.

Ben pulled up in front of the house. “Taggart, we all go through hard times. There’s not a man who doesn’t. Help is near if we just try harder to find it.”

Levi nodded. “I’ll see you in the morning—eight sharp. And thanks again.”

He flew in making supper and had it ready by the time Nate came in the door with Sarah as Levi had asked. Both were astounded at all the food and for once everyone got their fill.

While Nate and Sarah washed dishes, Levi went to work on the old Ford. He rigged up lighting so he could work on it in the dark. One short pause to put the kids to bed then back to the job. He kept at it until he finished. After a quick bath, he slept for a couple of hours.

His heart was light, his soul at peace for the first time since Marianne died. There were lots of good people in the world ready to lend a hand. But first, a man had to set aside his pride. Miracles were alive and well for those seeking one. It called for being willing to do whatever it took to make a bad situation better.

Then if you were brave enough, sometimes you had to make your own miracle.

The next morning, he woke to the beautiful sound of rain pattering on the tin roof and he smiled.