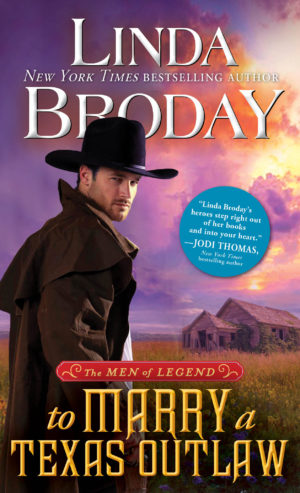 THE MEN of LEGEND

Outlaw Luke Weston survives by his wits. On the run for a murder he didn’t commit, the last thing he needs is to go looking for more trouble. But when Luke stumbles across a fiercely beautiful woman struggling against two heavily armed men, it’s obvious that trouble has found him.

After all, he never could resist a damsel in distress.

Josie Morgan’s distressed, all right—and hopping mad. She has no idea why she’s been kidnapped…or who she is…or why her body melts for the mysterious gunslinger who saved her life. But as the lost memories come tumbling back together, Josie is faced with the stark reality of why she and Luke can never be…even as her heart is telling her she will always be his.

Josie put her hands on her hips. “I’m guessing you and your father had words. Saw it coming. I knew something would send you running.”

“I just needed some fresh air.” Luke Weston tried to keep the anger from his voice but it sneaked in anyway.

She leaned back to stare up at him. “When you head out, I’m going with you.” Her chin stuck out at an obstinate angle. “This is a fine place to rest—in fact, there’s none nicer—but if you’re thinking to dump me here, you’d best think again.”

The fragrance that belonged only to her filled his senses. She stood before him bathed in the silvery moonlight. Her nearness messed with his mind. Her lips were too perfectly curved, too tempting, too close.

“You’re one crazy, mixed-up woman.” He put his hands gently around her neck, lowered his head, and claimed her mouth.

The kiss was hot and needy, and he didn’t apologize for the sudden roughness. Hunger for her consumed him with all the fierceness of a summer storm. He stood unmoving in its path, facing the furor.

Josie was imperfect, like him. The lady never pretended to be more than she was—not even when she played a role. But she didn’t have to. She could do whatever the situation called for, whether it be a tender touch or a bullet from her gun. Luke had never seen another like her, even in all his wandering.

When he broke the kiss, he nibbled slowly across her lips, teasing, wanting to make her yearn for more as he did. Her breathing was ragged as he gently tugged her plump bottom lip into his mouth with his teeth.

He pulled her against his chest with a low curse, and gave himself over to the passion or lust or whatever the hell it was. He slid his hands into her hair and wrapped the silk around his fingers.

She thrust her arms around his neck and melted into him.

What they had seemed right. Yet if it turned out to be all wrong, he couldn’t stop. Not this time.

This time the hunger was too raw and consuming. He couldn’t think. Couldn’t speak. Couldn’t move away as he should. All he could do was feel, and the need to banish the constant loneliness for a little while drove him past the line he’d drawn. He wanted to feel whole again and only Josie could make that happen.

Luke found her lips again and slid his hands down the sides of her body to her hips. Josie Morgan was made for loving, her curves designed for a lonely outlaw to hold in his dreams. The way Josie clung to him told of the desperate desire she, too, felt. She made little mewling sounds in her throat and tightened her grip on his vest as though he fought to get away.

She didn’t know he’d move heaven and earth to spend just one night in her arms. Better for her that she didn’t. Better for everyone. This way, no one would get hurt when he said good-bye.

Even though he knew it to be a lie, he told himself that this meant nothing, just slaking a thirst for both of them. But he wasn’t a good enough liar to convince himself of that.

Truth be told, she’d wiggled her way past every one of his defenses and planted herself in his heart. Maybe admitting that would buy him some favors when someone’s bullet sent him to the fiery pits of hell.

He realized she needed air and ended the kiss. With a final brush across those swollen lips, the closeness driving him insane, he rested his forehead on hers. “Dios mío. Lady, someday when I get all this mess straightened out and I know for sure you’re free, I’ll take you somewhere private.” His voice was hoarse and raw. He rested his hands at her small waist above the low-slung gun belt and vowed, “I’ll light a fire inside you and make slow, steamy love until the stars fall right out of the sky and the world disappears.”