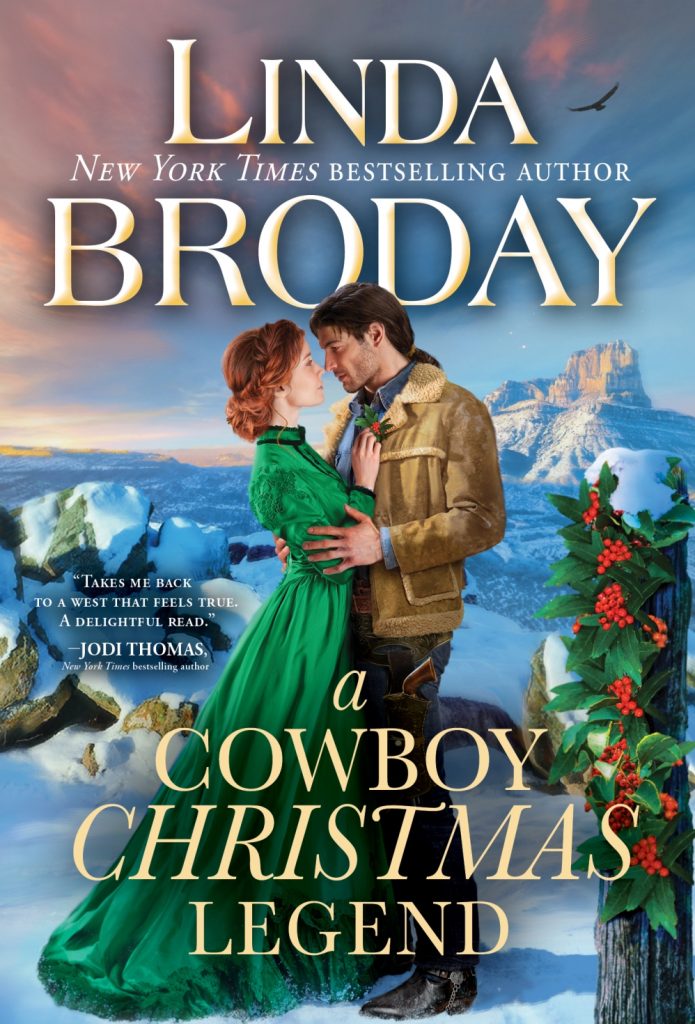 This stunning, emotional, and redemptive historical Western romance by bestselling author Linda Broday will leave you cozy and warm this Christmas season, with:

Devastated by grief, Texas Ranger Sam Legend II tries to make a new start in the Texas Panhandle. As a bladesmith, all he needs is a bed, a hot fire, and enough solitude to let him heal after the death of his wife. But when fiery Cheyenne Ronan comes blasting into his shelter with accusations, he knows he won’t be getting the peace he desires.

From the moment he meets Cheyenne Ronan, Sam’s quiet life is anything but. Now he’s hunting the men responsible for his wife’s murder, tracking down a counterfeiting ring with the Texas Rangers, and caring for a family who finds refuge at her ranch. And with Christmas right around the corner, Sam’s got his hands full. But with Cheyenne by his side, he’s starting to wonder whether a second chance could be the stuff of Legend.

Shadow whined and nuzzled his hand then pulled back and pricked her ears at some noise that escaped Sam.

“What is it, girl? What’cha hearing?”

With a soft huff, the wolf dog turned to go back inside, telling him everything he needed to know.

Sam seemed to have lost what sense he had, standing out there in faded red long johns, freezing his rear off. He glanced at the small shed that housed a cold forge and sighed. He’d have to keep it going strong throughout the next day to complete the Christmas knife orders. Sam loved plying the bladesmith trade, and the creative opportunities it afforded fulfilled something deep inside that was hard to explain. The fun part was turning his imagination loose and seeing what he could design. His knives had begun to gain recognition for both craftsmanship and quality, which meant he had to talk to more and more people.

Dammit! He couldn’t have one without the other, and he needed the income to live on.

Finding all this reflection bothersome, Sam slipped inside and lowered the flap. Stoking the fire, he crawled back beneath the covers.

The soft crackle and pop of the fire lulled him to sleep in no time.

A sudden burst of air rushed into the crude abode. A fleeting image crossed his vision.

Was this just another crazy dream?

Or was it more of the danger that existed far outside of town?

He started to throw back the covers when a figure ran across the room and leaped on him. “Where is he?” the person growled. “What did you do with the man living here? Kill him?”

Shadow lunged at the intruder, teeth bared. The voice, belonging to a woman, to the dog, “I have no quarrel with you, Taklishim. Quiet.” The obedient animal laid down.

Sam struggled to get his bearings. The pressure at his throat had to be a sharp blade. That much was clear. He swallowed very slowly and glanced up, moving nothing but his eyes.

Long hair hung over her shoulders; the ends of a few strands brushed his cheek like the whisper of silk. She seemed tall. Slender.

The firelight revealed strong facial features, though not the color of her shadowed eyes, and led him to believe she was probably pretty. The woman sitting on his chest had . Even though Sam hadn’t been to town in a blue moon, or been with a woman longer than that, he recognized that softness.

“Who the hell are you, lady, and what are you doing here?”

“I ask the questions.” She pressed the blade against his windpipe and growled. “What happened to the man living here? It’s a simple request.”

Anger swept over him. “You got some damn nerve!”

For the first time, her glance wavered, and the sharp edges of her face cast a softer shadow. “When did he pass?”

“About four months ago.”

“You’d say anything to save your hairy neck.”

“Come daylight, I’ll take you to his grave.”

She snorted. “Name one reason why I should believe you.”

“Because it’s the truth?” Sam eyed the woman with fire in her eyes. He wondered who she was. Tarak had been pretty old. Maybe a great-granddaughter?

When he caught her casting a curious glance around the room, he grabbed her arms and flipped her onto her back. He held her arms above her head, the knife still in her hand. Her chest heaved with seething anger. Though she wore some kind of long duster, her deerskin dress indicated a native. Comanche? Apache? Both had occupied this area until forced onto reservations. Maybe she’d walked off one.

Her eyes, glistening pools of black in the dim light, stared silently up. Rage tightened every inch of her supple body. If she got free, she’d probably plunge that blade into his heart faster than he could spit. Her glare promised that.

She remained stubbornly mute. Finally, she grated out, “One you should fear.”

Maybe he should, but his gut wasn’t screaming that loud a warning. At least not yet. “Was Tarak your grandfather?”

“Lady, this is twice tonight I’ve had my sleep interrupted. I’m tired and I have a full day of work looking at me come daylight.” He got off and pulled her up, taking the knife from her. Looking around, he tugged her toward the large trunk in the corner, three paces from the bed. He found a long strip of rawhide. He lowered her to the pile of furs and lashed her to the trunk, not too tightly though, lest he mar her skin. “That should hold you ’til first light and we can sort all this out.” He tucked a warm blanket around her.

That a woman in her predicament would think about her horse surprised him a little. But then he recalled how gently she’d spoken to Shadow. She liked animals.

“Where is the horse? I’ll get it out of the weather.”

“She’s north about a hundred yards out, tied to a mesquite.” A moment later she muttered, “Thanks.”

“Don’t mention it.” He wasn’t about to let a horse stand the rest of the night freezing to death. He pulled on his britches and boots and went out into the wind that had kicked up, cussing a blue streak that he’d forgotten his coat.

The horse was right where the woman said. Sam lost no time getting the animal into the warmth of a small lean-to with his Appaloosa named Rio. He removed the saddle before rushing back inside his grass and twig house.

“I put your pinto with my horse.” Sam removed his boots.

Sam paused midway of yanking off his britches. “What did you call me?”

“Kuruk. That means bear in Apache. When I was on top of you, I wasn’t sure if you were man or beast. Why do you want all that hair? You must be lazy.”

She appeared to form an instant opinion about everything.

Sam grunted. “Makes it harder for you to slit my throat. I’m surprised you even found my skin.”

The Spanish words for crazy he understood. Sam crawled back in his bed and tugged the covers around his chin. “Try not to snore.”

He’d just gotten comfortable when a teary voice spoke. “How did Tarak die?”

“Old age most likely.” The old man had been almost a hundred.

“I should’ve been here.”

Why did it matter so much?

Questions about her kept circling in his head, keeping him awake. Then when the rain started, he finally put the blanket over his head.

But nothing could blot out the driven, determined lady who’d reminded him he wasn’t near dead yet.